If psychology has the equivalent of the X Factor,  then  Professor Philip Zimbardo would probably be a candidate to win the contest. A 50-year career in serious, academic psychology at one of the world’s top universities, plus a  Ph.D. from Yale.  Yet alongside this ivory-towered existence,  he has also sought to make psychology accessible to an ordinary, intelligent and inquiring audience.   His role as an educator has made him one of the most popular living psychologists  and even at the age of 81, he is still touring the world lecturing on the similarities and differences between acts of kindness and acts of evil.

Yet it wasn’t his successes which brought him to public attention, and made his name famous, but a near disaster.  A research project where participants suffered psychological harm and he himself lost his detachment and objectivity as researcher, and actually joined in with the group. 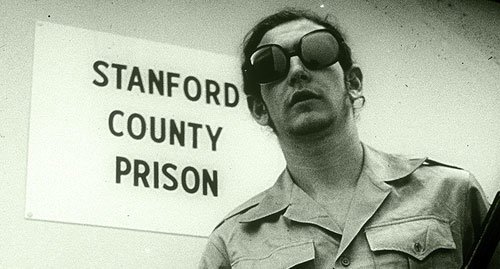 It all took place more than 40 years ago, when psychological ethics were in their infancy, and a prison was built in the basement of Stanford University.

In the Summerof 1971 an advert appeared in a newspaper offering steady, p/t work for $15 a day.   The ad specified  that male student volunteers  were needed for a two week study of prison life. From 75 volunteers, 24 were chosen to take part. They were judged to be emotionally stable, physically healthy, and of ‘normal to average’ personality. They were screened to make sure that none had psychiatric problems, or had ever been in trouble with the police. They were all white, middle-class students from across the US. All signed a consent form which told them that they would be either guards or prisoners and that their basic needs would be met during the experiment but that the prisoners could not leave during the experiment.

One quiet Sunday morning in Palo Alto, California, the volunteers who had been assigned the role of prisoners on the flip of a coin, were arrested, handcuffed by police and taken to the jail, which had been built in the basement of the psychology building at Stanford.  When they arrived they were finger printed, booked and taken blindfolded down to the basement . Once there,  they were stripped naked, talcum powder was thrown over them to simulate de-lousing. To mimic head shaving, they were made to put a stocking over their hair.  Each prisoner was then made to wear a sack-like dress and wasn’t allowed the dignity of underclothes.  To complete the dehumanising,  they were given a number which was printed on the front  and back of their smock.  From that point onwards they lost their name and had to refer to themselves and their peers by the number alone. Even in signing a consent form, it seemed unlikely that any of them fully comprehended what would truly happen to them.  The prisoners were allocated three to a cell, six feet by nine, barely large enough to take one and the concealed cameras began to roll. 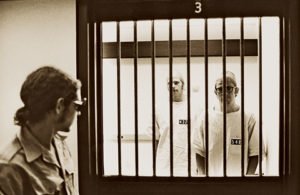 The guards on the other hand, were treated very differently and had a completely different dress code. Given khaki uniforms with epaulets, insignia and mirrored sunglasses to conceal their eyes, they also carried clubs, whistles, handcuffs and keys to the cells. There were guards on duty 24 hours a day, each working 8 hour shifts. They had complete control over the prisoners, who were confined to their cells around the clock,  except for mealtimes, toilet privileges, head counts and work. The guards only instruction was to maintain order and turn up for their shifts on time.  When not “at work” they could continue with their normal lives.  The guards were given an additional instruction – to do anything to maintain order and the respect of the prisoners .

The guards quite quickly began to inflict punishments on the prisoners and made examples of individuals by getting them to do push ups in front of the others.  They taunted the prisoners. At the beginning of the second day some of the prisoners, fed up with their treatment and being able,   college-educated students,  decided to try to take control back.  They barricaded themselves in their cells with their beds, ripped off their numbers and took of their stocking head coverings.  The guards responded by getting a fire extinguisher and blowing a jet of icy cold CO2 at them to force them away from the door.  They stripped each one of them naked, took bedding away and took the ring leaders to solitary confinement. After this event the guards’ behaviour became more brutal and shaming.

After this event, the prisoners began to react passively, showing feelings of helplessness from being no longer in control of their lives. Without exception, all the guards behaved at some point as a bully or aggressor. Many seemed to enjoy the power that went with the uniform.

After less than 36 hours, one prisoner had to be released because of uncontrolled crying, fits of rage, disorganised thinking, and severe depression. Two others were released on the following days.  Zimbardo, in the self-appointed role of prison governor, egged the guards on and became so involved in his role that he recounts being quite angry with the prisoners who broke down under the strain.  Over the next few days the guards in their boredom devised more and more obscene and pornographic punishments for the prisoners, including forcing them to simulate sex acts.

Zimbardo was not alone, there were other researchers as part of the team and not one of them questioned the ethics of what was happening.  It took a post doctorate student in the form of Zimbardo’s then girlfriend, Christina Maslach who visited and reacted with horror, to bring them to their senses.   Zimbardo, like a man waking from a trance, realised what was happening and closed down the experiment after only six days, one week early.

Amongst the myriad of questions about this experiment which demonstrated almost conclusively, that anyone can behave inhuman way in the right circumstances there is one question: “was the set up like real life?” One single crumb of comfort existed for humanity, that perhaps the guards were acting up to a role and people were not capable of that kind of behaviour in the real world.    One hope crushed, when the photographs emerged of Lynndie England and her colleagues standing in front of pyramids of naked Iraqi prisoners, or leading a naked man on a dog lead in Abu Ghraib prison.  The world may judge the Stanford Prison experiment negatively, but cannot, unfortunately doubt the veracity of conclusions. Dress people in a little authority and they can do the most awful things.

They may after all be one small positive out of this tale. Christina married Phil and he never again conducted such an unethical experiment. I wonder if the two are connected?