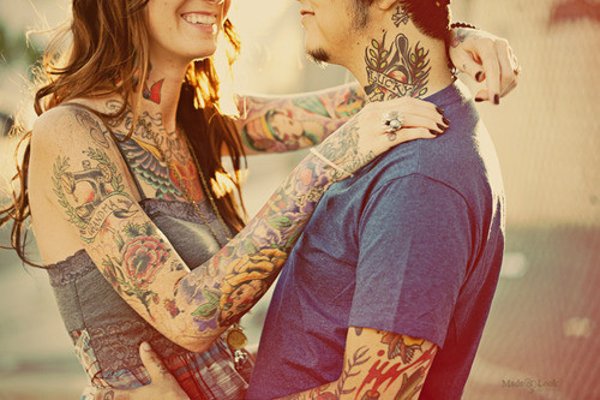 The psychology of getting a tattoo or body piercing is an interesting one and takes a certain type of person to do it. First of all you need to make the decision to scar your body on a permanent basis. Hopefully you do this because your body is going to look better afterwards but there are several other reasons why you might get one.

As a BetterHelp affiliate, we may receive compensation if you purchase products or services through the links provided. This is done at no additional cost to you, and supports our work.

Find the right therapist for you

Peer pressure can play a factor. Think of the scenario of lads on holiday all getting the same tattoo for the experience. Or even parental pressure, an 8 year old girl is going to find it hard to say ‘sorry mum but I don’t want my ears punctured’.

According to The Harris Poll, 2012, a survey performed on 2,016 adult Americans, on average 21% of people have a tattoo and the age bracket most likely to have a tattoo is 30-39. People without tattoos were questioned on their opinions towards them and 50% stated that they thought people with tattoos were more rebellious.

However of the people with tattoos 30% thought themselves to be more sexy with it and 21% said that they feel more attractive and strong.

The most popular body modification in the U.S is ear piercings at 49% but having a body piercing on another part of the body is far less popular at only 7%.

Although tattoos have been growing in popularity and acceptability over the past few years, its going to take longer for them to overtake ear piercing. Also piercing is accepted at a much younger age whereas 84% of people believe that a person should be between the ages of 18 and 21 before they should get a tattoo without parental consent.

Tattoos and Piercings on Women

Women tend to get tattoos and piercings for decoration of their body and are also more likely to get either than a man. This is likely to be related to the evolutionary psychology of the desire of women to decorate themselves to attract a mate. This is reflected in other aspects of the female culture. Having hair styled, putting on make up, cosmetic surgery and ludicrously expensive shoes. Most women will report that they do this to make themselves feel good but if that’s the case then why do men not feel the compulsion to make themselves feel just as good by putting on lipstick in the morning?

The answer to this is, sometimes. Probably not the answer you were looking for but allow me to explain. A study performed by Guéguen, 2013 asked several male participants on a beach to rate a woman on how easy they think it would be to have sex with them on the first date. Half of the time the woman had a temporary butterfly tattoo on and the other half of the time they had plain skin. The results were remarkable. The woman was thought to be far easier to approach when she was wearing the tattoo but it didn’t have an effect on how attractive she was rated.

This could be because males are very visual creatures when it comes to sexual attraction and the tattoo or piercing could be seen as a signal of sexual availability. ‘She likes to decorate herself perhaps shes trying to attract someone’ could be the thoughts going on at a primeval level.

Some evidence would seem to back up this perception about women with piercings as well. According to the study performed by Rovardo & Colleen, 2010 women with body piercings were found to be more likely than women without to have premarital intercourse.

Tattoos and Piercings on Men

Tattoos and piercings on men are seen by themselves very differently than how women perceive their tattoos. Men often get tattoos as a mark of camaraderie or because of an event that they want to connect with.

With regards to how they see themselves afterwards, tattooed men view themselves as more attractive than men without tattoos and also report themselves as having more sexual activity Drews et al, 2000.

Well again it does depend on your own personal preferences. Often it is more likely that women with tattoos will find men with tattoos more attractive because they have something in common. An instant topic of conversation has massive advantages in starting a dialogue with someone you are attracted to.

Also it has been found that women tend to be put off by large skin covering tattoos but one or two small tattoos have no effect on attractiveness.

On the whole piercings in men are still seen to have a stigma and far less men have piercings than they have tattoos. Often ear piercings can have feminine connotations but body piercings in other parts of the body show a certain rebellious nature encouraging the ‘bad boy’ stereotype.

Do you find Tattoos and piercings attractive? Please let us know in the comments section.

110 Responses to “Psychology of Tattoos, Body Piercings and Sexual Activity”