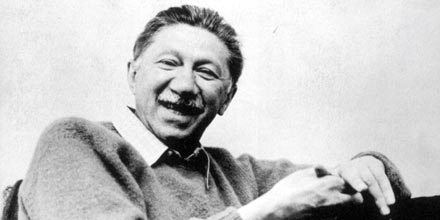 Have you ever stood on top of a mountain and looked down at the valley below filled with insect-sized cars, houses and people; birds riding the wind below and a view which leads right out to sea and across the landscape of mountain and river too? That not work for you? Ok, how about a gig or concert? A beach with warm sunshine or snow so fresh and cold it bites you, yet overwhelms your senses?  If you have ever had that “top of the world” feeling where it was so good to be alive that little else mattered, you have felt what Abraham Maslow called “peak experience”, true self actualisation and the top of his Hierarchy of Needs.

Maslow, born the eldest of seven children in 1908 to émigré Jews in New York, who suffered anti-Semitism as a child and lived through some of the darkest days of the 20th century, spent his life and work concentrating on what we as human beings need to be happy and successful.  Maslow is almost unique in his generation of psychologists in that while most psychologists were studying Freud and behaviourism, concentrating on abnormal psychology, he chose to study how we might, in the right circumstances, experience joy.

Maslow was one of the founding fathers of “humanistic” psychology and along with Carl Rogers, he focussed on the strength of humanity including free will, creativity, love and human potential.  This perspective, unlike the psychoanalytic and the behavioural schools of psychology, attempts to see the person as a whole and instead of looking at others from the outside only to try to analyse their problems.  While some of Maslow’s ideas have been criticised by academic psychologists as lacking empirical (research) proof,  his ideas along with others have remained popular and have even gained ground in recent years with the emergence  of  therapies such as solution focussed therapy and mindfulness thinking.

To anyone familiar with this model of the human existence it is impossible to dissociate it from the figurative representation of it as a triangle, pyramid or a series of steps.  In typical style, rather than start at the bottom, Maslow, started at the top.  He was interested in what characteristics and attitudes made people “Self Actualising”.  So he studied a range of successful, positive people including Eleanor Roosevelt and Albert Einstein.   He argued for the sake of psychology as a discipline;

“The study of crippled, stunted, immature, and unhealthy specimens can yield only a cripple psychology and a cripple philosophy”

While those words offend our 21st century sensibilities, what he appeared to mean was that psychology needed to study more than just abnormality.  So in addition to his exceptional people he studies the healthiest 1% of the college student population. From both studies he determined that “self-actualising” people have certain characteristics. Maslow noticed that they had self-acceptance, were sceptical about burdensome rules, had been tested through adversity yet could still rely on their inner potential.

Most of all, he suggested, they were people who meet their potential as human being but in particular they have all or some of the following characteristics:

While there are some amiable characteristics and we all know someone who is like that some of the time, one of the stronger criticisms of the concept of self-actualisation is that it is a “mirage” or at best a temporary state.

Maslow however, gave us a gift because his theory didn’t just focus on exceptional people it also explained the drivers which motivate people and his 1954 book Motivation and Personality set out the stages or steps between basic drives and becoming a self-actualising person.  While core to humanistic psychology,  the hierarchy is used in a wide range of training in fields as diverse as sports coaching, management training and even community development.

The 5 stages Pyramid of Maslow

The pyramid or staircase has five steps:

Maslow made several observations about the links between achievement of steps on the hierarchy and motivation.  He stated that “a satisfied need never motivates” but the corollary to this is that an unsatisfied need is highly motivating.  Comparatively few people in the North America and Europe will be on the bottom rung of Maslow’s hierarchy (especially if the basic drive to reproduce is discounted) Many, however, will be stuck at certain aspects of the second layer – an unenjoyable job, living in an area or housing which is unsatisfactory.  Maslow doesn’t answer whether it is possible to have elements of level 3-4 for example a sense of creativity and friends but have no money and nowhere to live.   I would suggest that perhaps a more realistic design for the hierarchy might be a “Rubics pyramid” of needs where you can have some elements from each layer in your life. With a topping of self-actualisation for the best days.

Maslow’s ideas are now over 70 years old and remain influential especially for the understanding of motivation. Personally, I think it is a little too simplistic especially if we consider the lives of many a great artist, content to leave us magnificent works,  yet to die young,  in virtual poverty.  With this in mind I want to leave the last word to an impecunious poet born at a similar time to Maslow, but who at times, gave us the peak experience which Maslow described so well:

“Oh, as I was young and easy in the mercy of his means,

Time held me green and dying

Though I sang in my chains like the sea.”