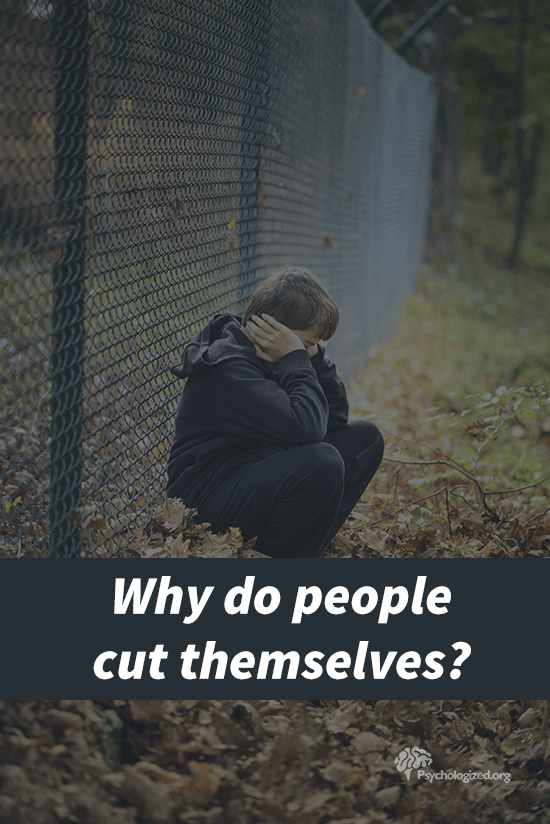 What is cutting and how many people do it?
Cutting is the most common form of self-harm.  Self-harm can also include: deliberate attempt to self-poison; anorexia; bulimia; binge drug or alcohol use; abuse of medicines; deliberate head banging and even hair pulling. The ICD10 and DSMIV are not particularly helpful in their explanation or diagnosis of this condition because they see it merely as a symptom of some other underlying mental illness.

The developing view of mental health professionals and health charities in this field is that deliberate self-harm should be seen as a problem/issue in its own right and not merely a symptom of some other malaise.

The UK-based charity LifeSIGNS define self- harm as:

“A coping mechanism. An individual harms their physical self to deal with emotional pain, or to break feelings of numbness by arousing sensation.”

It is accepted that it involves deliberate harming your body tissues without intent to kill one’s self. The relationship between self-harm and suicide is complex though, since cutting can result in unintentional death. Wounds may become septic and life-threatening illnesses such as cellulitis or septicemia can set in. There is also an increased risk of suicide in individuals who self-harm since about half of all people who kill themselves have self-harmed.

Some sociologists suggest that we live in a “Borderline Society” that is a society which tends to bounce to extremes and which is unforgiving on its members especially when faced with economic, health and other crises too numerous to mention. If this is indeed true then perhaps we have a readymade explanation for the rapid increase of cutting behaviour amongst, particularly the young.

This is especially true in societies such as the UK where we have materially rich but quality of life poor generation, who suffer the pressure from middle class parents and an education system which is target driven so much so that young children now are more likely to be known by their SATs scores than their names.

It is estimated Self-harm is more common than many people realise, especially among younger people. A survey of people aged 15-16 years carried out in the UK in 2002 estimated that more than 10% of girls and more than 3% of boys had self-harmed in the previous year.

It is also estimated that up to 22,000 young people were treated for self- harm in the United Kingdom in 2013. Even more worrying, figures from the NHS show that in the past year cases involving children aged 10-14 rose by almost a third from 4,008 to 5,192.

So not only is cutting and self-harming on the increase but people affected by it appear to be getting younger. It is more prevalent in girls than in boys. Some sources suggest that cutting may be as high as 10% of the young female population and 3% in males.

What are the reasons for cutting?

In a recent “Daily Telegraph” article a mother describes her horror as she discovered her privileged middle class daughter, from a stable family had cut herself so badly that an infection nearly claimed her life.

During the recovery, chatting together, she discovered the pressure her daughter felt under:

“I felt as if I was bursting out of my skin, like a sausage under the grill,”

Suggesting that the cutting was a release of pressure as her body and mental anguish became too much to bear. She also found out that her daughter was not alone, that all her friends had been doing it too:

“From what I have pieced together over the years, it was almost a form of showing off to each other: who had the most cuts? Who had the deepest? Who could cut themselves just before a lesson, or in a school toilet?”

Perhaps for some, she suggests repeated and excessive tattooing may have a similar effect. The pain of the needle becomes and addiction, which brings a sense of life but also conversely, a sense of calm.

There are a number of well recognised reasons why people self-harm including cutting:

What is known is that for some reason, most people although by no means all, stop cutting sometime in their twenties.

The reasons for this are not clear, but it may be something to do with maturity, accessing help or changes in circumstances.