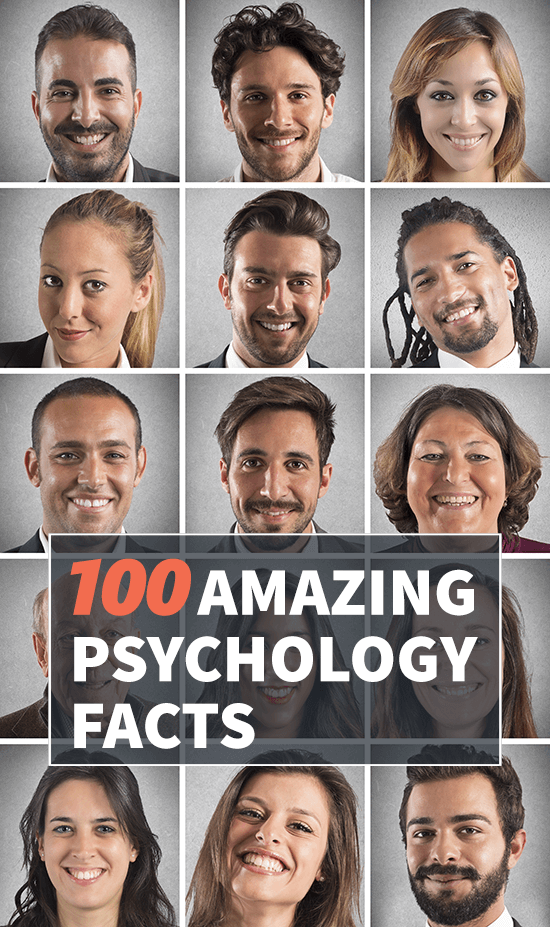 2. Fatherhood – Expectant fathers can sometimes experience a sympathetic pregnancy where they have symptoms like back ache, weight gain, strange food cravings and nausea. This has also been found to happen in some species of monkey.

3. Alcohol – As many as 9% of adult Americans have been to an alcoholics anonymous meeting at some time in their life (Moos & Timko, 2008).

5. Mental Health – Suicidal thinking or behaviour is the most common reason for people to be admitted into a mental institution (Jacobson, 1999).

11.  Soceraphobia – Fear of parents in law

13. Triskaidekaphobia – Fear of the number 13

17. Latrophobia – Fear of doctors or going to the doctors

24. Influence – We think that other people are more easily influenced than ourselves.

28. Happy Sun – People who spend more time in the sun are likely to be happier and happy people are more likely to fall in love because their happiness is infectious.

29. Eye Contact – If someone makes eye contact with you for 60% of a conversation they’re bored, 80% and they’re attracted to you and 100% of the time then they are threatening you.

30. Attraction – The pupil of your eye expands up to 45% when you look at someone you love.

31. Awkward Silences – It takes 4 seconds for a silence to become awkward.

34. Recall – Its easier to remember things with your eyes closed.

36. Brothers and Sisters – Having siblings is proven to help socialization with peers.

37. Clothes – What we wear affects how we behave.

39. Texting – Most people text faster when its someone they like.

40. Flirting – When flirting the average amount of glances to ‘send a signal’ is 3.

41. Motivation – Usually thinking of a successful outcome will reduce our motivation rather than increase it.

42. Control – In Milgrams obedience study 63% of participants kept giving seemingly lethal electric shocks because an authority figure was telling them to.

43. Psychology – The word psychology comes from the Greek word psyche meaning ‘breath, spirit, soul’ and the logia meaning ‘study of.’

46. Smart Cats – Cats have almost twice as many neurons in their brain as dogs.

47. Booze Crime – Alcohol is involved in 90% of cases of sexual assault on college campuses.

48. Marriage – Almost half of all married couples 75 and older still have sex on a regular basis.

49. Ghosts – Over half of the U.S population believe in psychic phenomena.

50. Medicine – Placebos can be as good as real treatments.

51. Failure – Freud initially only sold 700 copies of the interpretation of dreams.

52. Self Fulfilling Prophecy – The Stamford prison experiment had to be stopped after 6 days instead of 14 because the participants (and experimenter) started to become cruel.

53. Intelligence – Studies have shown that eating food without preservatives can improve I.Q by up to 14%.

58. Insomnia – The world record time without sleep is 264 hours.

59. Brain Structure – There are 100 billion neurons in the brain.

60. Pre-Historic Man – Our brain size has fallen 10% in mass since we were hunter gatherers.

61.Brain Weight – The human brain weighs 1300-1400g which is proportionately more for body size than any other species.

64.Olfactory Memory – Your sense of smell is the sense which is best attached to your memory.

65.Stress Memory – A small amount of stress helps you to remember things better but a large amount hinders your memory.

67. Primal Urges – The pursuit of food and water is the most powerful motivator. (Doddard & Miller, 1950)

70. Scientific Discovery – In 1909, a scientist by the name of Thomas H. Morgan discovered that chromosomes contained inherited information.

72. Creativity – We are most creative at night and least creative in the afternoons.

73. Baby Empathy – People are more likely to return a lost wallet if there is a baby picture found inside of it.

75. Emotions – The only innate emotions are joy, acceptance, fear, surprise, sadness, disgust, anger, and anticipation. Other more complicated emotions like love and guilt are believed to be combinations of these. (Plutchik, 1980)

76. Point the Finger – People are more likely to blame other people rather than the situation when something bad happens.

77. Personality – There are 5 key aspects to personality: extraversion, agreeableness, conscientiousness, neuroticism and openess.

78. Getting Lucky – Sex is not distributed equally, over 50% of sexual activity in the US is performed by only 15% of the population (General social survey, 1998).

79. Memory Loss – Retro grade amnesia is a condition where you don’t remember anything before your trauma.

80. Contradiction – Cognitive dissonance is when you have two conflicting beliefs and you adjust one to fit the other.

82. Imagination – Most people imagine things from above and at an angle.

83. Optical Illusion – Chromostereopsis is when two colours are together and one of them sticks out more than the other. This affect is most obvious with the colours red and blue.

85. Racial Recognition – Studies reveal that people recognize and interpret the emotional facial expressions of those in their own race faster than those who are a different race. (MacDonald & Matthew, 2008)

86. Monotony – Repetition physically changes your brain as new connections are made between brain cells.

87. Focus – The human attention span maxes out at about 10 minutes, over that and we will tend to revert to daydreaming.

88. Friends – The maximum number of close relationships/friendships you can maintain is between 50 and 150.

90. Tattoos – According the the New York Times 17% of people regret getting a tattoo.

92. Yawning – A study at John Hopkins University found that the myth that you yawn for your brain to get more oxygen is untrue. It is in fact to cool your brain down

93. Mothers Love – Children aged between 6 and 12 are more likely to wake up hearing their mother’s voice calling their name than hearing the sound of a home smoke alarm.

95. First Time – People who lose their virginity late (older then 19) have a higher income, higher education and a more healthy relationship later in life than those who lost their virginity earlier (Harden, 2012).

96. Socialization – Your friends on average have more friends than you do. If you think about it this is because if you are friends with them they are more likely to be popular. (Scott, 1991)

97. Pain – Emotional pain is remembered more than physical pain and has more effect on your behaviour.

98. Seafood – In the March 2003 edition of Discover magazine, a report describes how people in a 7-year study who ate seafood at least one time every week had a 30% lower occurrence of dementia.

99. Hormones – The hormone estrogen which is found in both men and women, but in more abundance in women, causes an improvement in your memory function.

100. Brain Enlargement – London taxi drivers, who have to remember every street in London, have an enlarged hippocampus suggesting that this area grows as you memorize more information. (Maguire et al, 2000)